What Does it REALLY Mean to Do Standards-Based Grading?

How does a district implement high quality standards-based grading, and when is the right time? Chris Sturgis does her best to synthesize what she’s been learning from districts in two articles published on CompetencyWorks.   She encourages debate and the addition of some nuance to these thoughts. 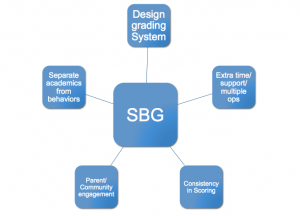 What is the difference between standards-referenced and standards-based grading?

In his book, Formative Assessment & Standards-Based Grading, Robert J. Marzano explains the difference. “In a standards-based system, a student does not move to the next level until he or she can demonstrate competence at the current level. In a standards-referenced system, a student’s status is reported (or referenced) relative to the performance standard for each area of knowledge and skill on the report card; however, even if the student does not meet the performance standard for each topic, he or she moves to the next level. Thus, the vast majority of schools and districts that claim to have standards-based systems in fact have standards-referenced systems.”

The element of standards-based policy that is consistent with competency education is that schools continue to work with students, providing more instruction (not just time) until students reach proficiency. They are not passed on to the next course or teacher unprepared.

The implications of this understanding of competency-based grading is that we hold this as the North Star – districts can say they are making the transition to competency education, but I don’t think it makes sense to say that they are doing competency-based grading until they have developed the capacity to meet students at their performance levels. Again, this doesn’t mean tracking or sorting students based on their performance levels. It means knowing where students are in their skill levels and designing the most effective strategies to help them build the pre-requisite skills AND meet grade level standards. Our challenge is to became more knowledgeable, and invest in research if needed, about how to most effectively help students make progress.

What does it really require to implement standards-based grading?

From what I can tell based on my conversations with competency-based schools across the country, the following are the major activities, structures, and practices that need to be in place before you introduce new grading policies and practices.

If you are going to commit to getting students to proficiency on all the standards for a grade level or a performance level within a course or a school year, you are going to have to be prepared for those students who are going to be “not yet proficient.” One piece of that is to have ways to provide “timely, differentiated support based on their individual learning needs.” (That’s the fourth element of the working definition for competency-based education.)

A second and highly related issue to addressing students who are “not yet proficient” is the idea of habits of work. It is often the inability of students to be self-directed learners that produces the situation in which they can’t keep up with the work. This appears to be as true for honors students as for those who have gaps in their foundational skills. When we take away the ability of teachers to use points to incentivize specific behaviors, we have to replace it with something. That something are the habits of work. (I learned from Casco Bay to think about it as the HOW of learning, whereas academics are the what of learning.)

Standards-based grading depends on teachers having a shared understanding of what students need to demonstrate to be credentialed as proficient. This requires three things.

Engage parents early so they understand why it is important to change the grading system–don’t just focus on the change it self. There are different strategies being recommended by technical assistance providers about community engagement. One version is an inclusive engagement process at either the district level (if you are small enough) or at school level in which parents, community members, and students contribute to what it is they want for their kids or for their lives when they leave high school. This tends to be broader than college and career ready and will have an impact on your grading system. You will want to be able to monitor progress, provide feedback, and engage students and their parents around the domains and competencies that are important to them.

There are lots of details to figure out about a new grading system and policy. The first recommendation is to do research into what other districts and schools have used and what bumps they have encountered along the way. Here a few of the things you will have to figure out:

Scoring: The scoring system, however it is organized (inadequate evidence, emerging, developing, proficient, advanced, etc.) will need to be used to support the calibration process described above. Take the time to run them by your local school council and student advisors to make sure the terms are meaningful to them. (See In Search of the Goldilocks Scale for an example from a school about this process.)

This represents a summary of two articles by Chris Sturgis on CompetencyWorks:

You may also reference:

Please tell us what you think? Cancel reply