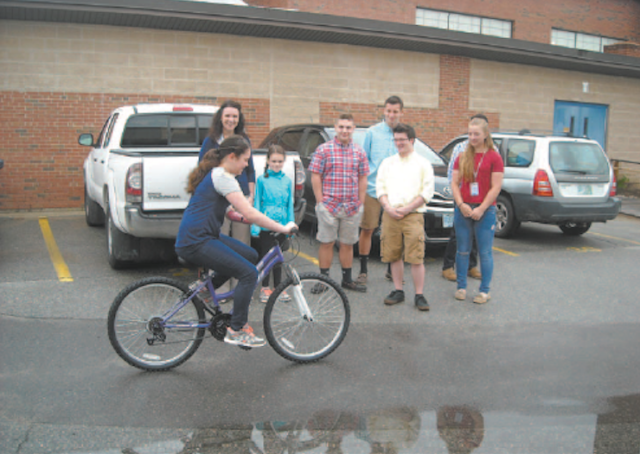 Morgan Peterson was born without the lower portion of her left arm. The limb tapers to slim roundness just below the elbow. She was 6 months old when ﬁtted with her ﬁrst prosthetic, courtesy of Shriners Hospitals. Four more have answered her increasing needs for growing room. Morgan, 10, a ﬁfth-grade student at Heron Pond Elementary School, nevertheless is as active as any of her friends. She especially likes bike riding. And she likes building things.

She is a frequent visitor at “builder” workshops held at Milford High School & Applied Technology Center. Morgan’s mother, Meg, wondered aloud at one such workshop whether it was possible for the students to make a device that would modify Morgan’s rigid artiﬁcial limb so she could ride her bike more comfortably. “I had an attachment made of rubber,” Morgan said. “It would fall off when I turned left.”

The team of students, under the tutelage of teacher Frank Xydias, focuses on science, technology, engineering and math. Several seniors are headed for colleges emphasizing those disciplines. The conical prosthetic the students examined allowed no ﬂexibility at its terminus. Morgan described the problem more fully, and the group immediately embraced the idea of designing and building a better attachment, one that would allow lateral movement, ﬂexing and rotation.

Morgan joined the class in making the adapted device that replicated more closely the motions of the human wrist. A fuller range of motion was the goal. “What if we attach a half inch bolt and top it with an aluminum knuckle?” That was the idea that morphed into a reality.  A socket wrench with a rotating knuckle was eyed with interest. Bolts and screws were inspected.  Meanwhile, Morgan printed on a 3-D printer a customized fitting for the left handlebar of her bike.  The fitting would secure to the handlebar the new bolt and knuckle device built to protrude from the wrist end of of her conical prosthesis.  Tweaks abounded. Then, it was time for Morgan’s final test ride, one undertaken on Wednesday, June 8, in the school’s parking lot. Those at Milford High School who watched Morgan’s debut ride were thanked by Morgan’s parents, Meg and Kevin Peterson, both of whom were on hand to watch, along with Morgan’s sister, Erin, 8, a third-grade student at Heron Pond Elementary School.

The STEM team includes Jen Carson, 17; Nikolas Liamos, 17; Matthew Chase, 16; Sam Draper, 18; Tirrell O’Brien, 18; and Derek Lovejoy, 17. Some were there to celebrate the success.  Don Jalbert, Director of the Applied Technology Center, also was on hand to offer congratulations, as was Robert Marquis, superintendent of Milford schools.

Erin said she was amazed at the result. She described an unsuccessful family bicycle trip that ended early because Morgan was unbalanced in the saddle and unable to fully maneuver, especially when turning left. They all went home, midride, from their ice cream run. Erin now expects no diversions. “Morgan’s neck hurt and her back hurt because she was leaning,” Erin said. “Now, we can make it all the way.”  Marquis noticed the smiles that previously might have been grimaces of pain. Morgan was riding her bike with ease.

Marquis contended that STEM can help people. “It’s important for people to realize how STEM can make people’s lives better,” Marquis said. “This a great example of how it does that.”  Morgan’s mom said the new adaptation went beyond the family’s dreams. She said her dad, database administrator for Milford schools, already was working on something else to help Morgan. He and his daughters often build things together. He mentioned that Morgan’s sets of Lego blocks are not toys, but more tools she uses to build things she already has designed from scratch.  Meg Peterson said the finished device was more than her family ever expected.  “Her dad was thinking of how to rig something with duct tape and WD-40,” she said. “But this is so much better.”

Xydias wasn’t surprised at the outcome. He said the group identified the problem, researched appropriate materials and explored many options for reaching their goal. He said he offered guidance. “My role was to facilitate the connection between Morgan and the students,”Xydias said.  “I would ask them why they did this or why they did that, and then let them think it out.”  Xydias added that a patent attorney has volunteered services that might help the design become manufactured for a larger population as a help to humanity.

Morgan isn’t thinking that far ahead. Right now, she is too busy riding her bicycle in safety and comfort.  The rides to buy ice cream promise to be more frequent.  “Riding will be a lot easier than it was before,” Morgan said. “It’s kind of like when you first take off, you have to learn to balance again. Everybody worked very hard on this project. It’s really cool that they helped me.”

Reprinted on Manufacturing Stories at https://manufacturingstories.com/new-prosthesis-helps-10-year-old-bicyclist-3d-printing-stem-project-milford-nh/.

Please tell us what you think? Cancel reply